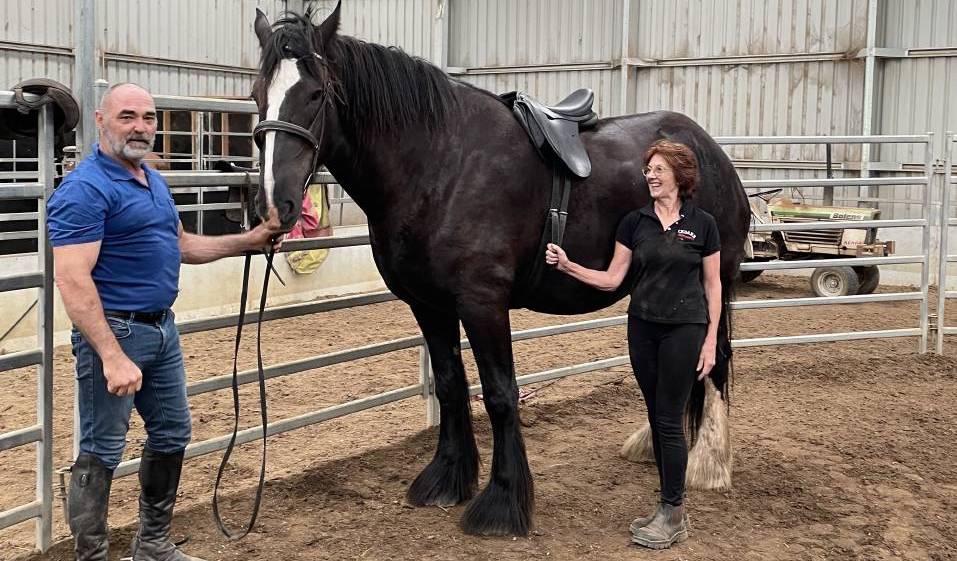 In the Southern Coast Register post, owner Helene Scarf speaks about Cedars Stormy George who is officially the tallest Shire horse in Australia Despite his massive size, she says Stormy, as he is affectionately known, is a “gentle giant.” The gelding stands an imposing 19.1 hands – six foot five inches in the old scale or around 196 centimetres to the wither.

A horse’s size is measured in hands (around four inches) – originally a man’s hand was used with the base of the palm to the fingers on top of each other from the ground, just beside and behind a foreleg to the top of the withers (shoulders). Tipping the scale at just over a tonne, he took over the mantle as the country’s tallest horse after his cousin Luscombe Nodram “Noddy” recently passed away, aged 19.

ABOVE: Helene with Stormy George (right) and his mother Luscombe Joy.

ABOVE: Stormy George and Scott Brodie during the filming of The Healing.

ABOVE: Stormy George is now too big for his local transport.

And if you would like to see Stormy George close up he will be competing at this year’s Kangaroo Valley Show on February 11-12 in preparation for the Sydney Royal Easter Show in April, where over the years, he has also been a regular competitor. The eight-year-old (who will actually turn nine on October 23) will be competing at the Valley Show on Saturday, February 12 in the Shire’s competition in both the led gelding and ridden classes.

“We will be using the Valley show as a warm-up for Sydney. It is also an opportunity to register points to qualify for next year’s Sydney Royal,” Helene said. “We also thought it would be a great chance for local people to see the nation’s now tallest horse at a local show.

“2022 is the 200th year of the Sydney Royal so it is a big deal competing there this year. And after so many other shows were cancelled last year due to COVID it has been hard to qualify.”

In preparation for the upcoming show season, Stormy has been transported to Helensburgh where he is working with top-level horse trainer Scott Brodie at his equine centre, Horses From Courses. “Scott will just tune him up ahead of the Sydney Royal,” Helene said. “He will be ridden every day and will be in peak condition for Sydney.”

Scott and Stormy George actually feature in a documentary ‘The Healing’ which will be screened in Nowra next month sometime. {Read more about it HERE} The documentary was made at barranca with a handful of ex-service people and shows how the program has evolved and works. Stormy played a part in the making of the movie carrying Scott around carrying the huge camera while filming the documentary. “All the while in adjacent paddock Shires romped around offering their encouragement and support,” Helene said.

Stormy lives with several other Shires which form part of The Cedars Shire Horse Stud at barranca. He’s also a workhorse and pulls a sled with his harness collar on.

“He’s just so quiet and placid – a bit of a sook actually. You go into the paddock and he comes up to you and just follows you around,” says Helene. “He always comes up to say hello to our guests and they can feed him and our other animals in the feed up – they love him.”

When you stay at barranca you can feed Stormy and the other shire horses in the morning, which is, as you can imagine, majestic.

Back To News
Previous Article
Next Article